The image above is by the wonderful graphic design artist, Alejandra Delfin who inspires my vision and work! Click on the above image to learn more about her! 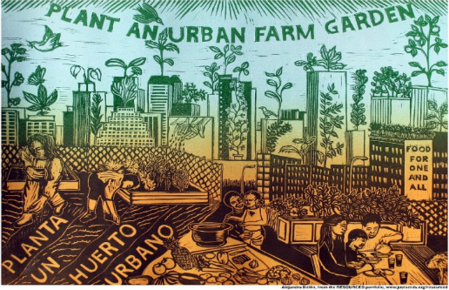 Anthony Olivieri, the founder of FHEED has a Masters in Urban & Regional Planning from Florida Atlantic University with a specialization in community food system policy and Geographic Information Systems (GIS). His Masters thesis, A Community Food System Plan for Miami-Dade County identifies areas of low healthy food access and high rates of diabetes and proposes a social justice-based approach for ameliorating Miami-Dade’s health and food disparities. A Food Sovereignty Charter grounded in the U.N. Declaration of Human Rights, a Food Policy Council, and social justice evaluation criteria are essential aspects of his community food system plan recommendations. Anthony became interested in community food systems through his involvement with various South Florida food justice organizations. Since 2009, he has attended over a dozen workshops and conferences related to food justice and planning. In 2009, he volunteered with the Urban Oasis Project where he learned about the empowerment behind households having the skills and resources to ensure their own food security and self-reliance. In 2010, Anthony assisted Earth Learning's  first Community Food Summit with their mapping of over 150 South Florida farms, food producers, farmers markets, urban gardens, processors, and advocacy organizations. During the summit, Anthony participated in Mark Winne'sfood policy training seminar.This involvement deepened his understanding of food policy and Miami's local food movement. Between October 2010 and May 2011, Anthony was a board member of the South Florida Food Policy Council. During March & April 2011, the City of Miami shut down several farmers markets and urban farms due to conflict with the City's zoning code (Miami 21 had not in fact, defined these uses). In response, Anthony and fellow policy members, Erin Healy (Youth LEAD)and Roger Horne (Urban GreenWorks), proposed a Farmers Market Policy White Paper, which Roger Horne successfully brought to Mayor Regalado's attention. In December 2011, the City of Miami adopted much of the paper's "WHEREAS" statements in a new ordinance for a Farmers Market pilot program.   Since 2011,  Anthony has been a community food systems consultant with the Broward Regional Health Planning Council's CDC-funded TOUCH initiative (2011-2018).In September 2014, TOUCH was re-funded for another three years through the CDC's Partnerships to Improve Community Health (PICH) grant. In addition to his consultancy, Anthony was a full-time instructor from 2014-2015 with the School of Urban and Regional Planning at Florida Atlantic University, where he developed and taught South Florida's first urban planning course on community food systems.Anthony is featured in the 2015 documentary, The Hidden Hungry, by Diane C. Lade, senior writer for the Sun Sentinel.